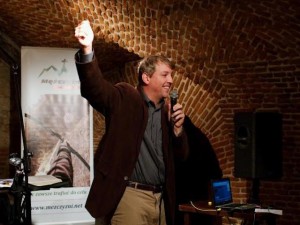 As a full time Catholic Evangelist, I have the privilege of meeting and working with many people who share the “Good News” of Jesus Christ and His Catholic Church. Although they preach a common message, their styles often differ dramatically. I find that to be a good thing because different approaches are often needed. On a personal level, some of these folks inspire me more than others. As a result, I have a set of “go to” people who I turn to when I need to get “fired up” about my faith.

A few years ago, while still working as a computer programmer, I was driving home from the office and tuned into Holy Spirit Radio (a Catholic station based in the Philadelphia area). Fully expecting to listen to an EWTN program, I was surprised to hear a local show – The King’s Men. As I started to listen, I was drawn in by the sincerity and passion of the host, Mark Houck. As a man, it meant a lot to hear another male openly proclaim His love for Christ and the Catholic Church.

In the months that followed, I investigated Mark’s apostolate and continued to be inspired. I was especially excited when I discovered that Mark was scheduled to appear on EWTN’s Life On The Rock. I watched with admiration as Mark spoke about the need for men to embrace their faith and be witnesses to the world. He spoke about the King’s Men and their mission to combat the evil of pornography and abortion. He also explained the concept of authentic male spirituality, which was something that I needed to hear. After I finished watching the show, I told my wife that more men need to speak like this…I was energized!

As I got more involved in Catholic evangelization, I eventually was able to meet Mark. Since we both live in the Philadelphia area, I was invited to speak at a King’s Men meeting and I had the opportunity to witness the great work that these men were doing. I saw how Mark Houck and Damian Wargo (the co-founder of the King’s Men) encouraged and supported men who were struggling to live Christ-like lives. I listened as men shared their stories of struggling with pornography and the evils of the world, only to be comforted and strengthened by Mark and Damian. I left the meeting feeling inspired and confident.

When I made the decision to venture into the scary world of full time Catholic evangelization, Mark was one of the first people to volunteer his assistance. “Let me know whatever I can do for you, brother” (BTW, it’s not a coincidence that Mark calls every man he meets “brother”. He REALLY believes that we are all brothers and sisters in Christ!). After that initial offer, he continued to reach out to me and my apostolate. He had me as a guest on his radio show and even allowed me to guest host the program while he was on vacation. Unlike some people in the public eye who disappoint you once you get to know them, the private Mark Houck is every bit as passionate and caring as the public persona. He is “the real deal”!

If you ever have the opportunity to listen to Mark Houck speak…do it! If you are looking for a speaker to fire up the men in your parish or conference, Mark is your man. He will encourage you, he will inspire you and, most of all, he will help you to do what all Christians are called to do…become imitators of Jesus Christ!

1 Response to Mark Houck – Rallying Men For The Kingdom