Continuing The March For Life 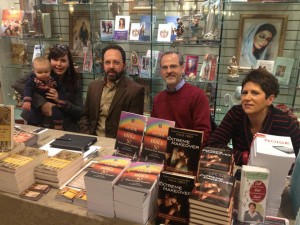 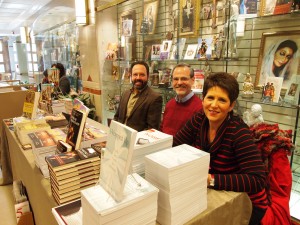 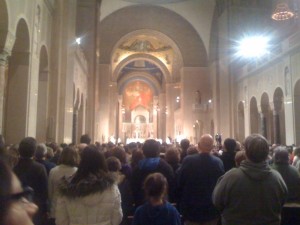 I’ve just returned from Washington, DC where I had the honor of participating in a 2 day book signing at the Basilica of the National Shrine of the Immaculate Conception. On January 24 & 25, I signed copies of A Worrier’s Guide To The Bible, along with fellow Catholic authors Teresa Tomeo, Dan Burke, Fr. Michael Gaitley, EWTN’s Brother Leo, Regina Doman and Dr. Monica Miller.

I had the opportunity to sign lots of books and meet many friends but, most importantly, I was able to be with hundreds of thousands of people who believe in the sanctity of life! As I sat at my table outside of the book store, I witnessed an endless stream of individuals who journey to the nation’s capital to attend the March For Life. Clergy, religious and lay people all came to make a statement that ALL life is sacred and needs to be protected. I felt an incredible sense of unity as well as frustration as so many people were there to protest the killing of innocent babies. Something about that thought just boggles my mind…we were there to protest the legal murder of the unborn. Huh? Isn’t it true that we live in a “civilized” society?

Rather that get depressed, however, we need to keep doing what 650,000 of us did that day in Washington. We must continue to stand up for life, which means telling the truth about abortion. It’s up to us to do the job that the mainstream media refuses to do. We need to continue to speak up for the silent victims of this modern day holocaust. Take it from me…our workplaces, schools and even our Catholic churches are filled with people who have been tricked into thinking that abortion is simply “the right to choose”. We have to inform them that it is nothing more than violent, bloody and gruesome murder. Since abortion was legalized in the United States, 55 MILLION BABIES have been legally murdered. 55 MILLION! Although it’s important that so many of us came together to visibly march on behalf of life, it should not be a one day event. We should continue to “march” as we return to our homes. The stakes are high, my friends, and it’s up to us to spread the word. Please continue to pray, fast, volunteer and speak out on behalf of those little ones who can’t speak for themselves. Let people know what abortion really is. As Bishop Farrell proclaimed in his homily during the closing Mass for the March for Life, we are making a difference and we WILL one day win the battle. Until then…

we MUST continue to fight!

This entry was posted in abortion, Christian Living. Bookmark the permalink.

2 Responses to Continuing The March For Life