The Feast Of St. Stephen – A Case Of Bad Timing? 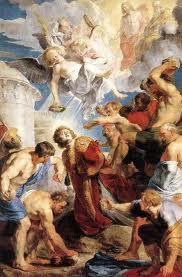 “If any man would come after me, let him deny himself and take up his cross daily and follow Me.” (Luke 9:23)

One day after the beautiful celebration of Christmas, the Church honors the first Christian martyr, St. Stephen.? Talk about bad timing!? Isn’t this supposed to be the season of joy and peace?? Is the Church calendar so crowded that we had to squeeze Stephen in this week?? Wouldn’t he be a better fit during the season of Lent?

In reality, the Church knows exactly what she’s doing and this celebration (and yes, it is a celebration) takes place at the perfect time.? We often? tend to focus on the pleasant aspects of our Catholic Faith and neglect the painful realities that are necessary for followers of Christ.? While most people know that the colors of the Christmas season are red and green, few know the meaning behind those colors.? Green is the color of life and represents the birth of the Savior and the eternal life promised to His followers.? Red, on the other hand, represents suffering and the blood which has been shed for the Faith.? If we compare our lives to a Christmas wreath, we see that the red and the green are intertwined.? If we truly wish to follow the Lord, we must be prepared to suffer in some capacity.

St. Stephen was a deacon in the early Church (Acts 6:1-6) and became to first Christian to be martyred for the Faith (Acts 7:54-60).? What was Stephen’s crime that resulted in his being stoned to death?? He told the people something that they didn’t want to hear!? After relating the story of God’s covenant and the stubbornness of the? Israelites (Acts 7: 1-50), he proceeded to tell his listeners that they were also at fault (Acts 7:51-53).? As a result, they cried out, covered their ears (great way of handling something you don’t want to hear, isn’t it?), and stoned him to death.? As he lay dying, St. Stephen forgave his attackers (Acts 8:60).

In the present age, there are many issues that can cause us to be “martyred”.? Defense of life, condemnation of contraception, loyalty to the Catholic Church and her teachings, refusal to gossip or use foul language, etc.? Any of these things can bring on an attack when proclaimed.? By remaining silent we can sometimes avoid the suffering and backlash that speaking out could send our way.? On the other hand, St. Stephen didn’t care about the consequences.? He accepted the “red” along with the “green”.? He spoke out even though it caused him to suffer and die.

This entry was posted in abortion, martyrdom, suffering. Bookmark the permalink.