Obama Reaffirms His Commitment To Abortion 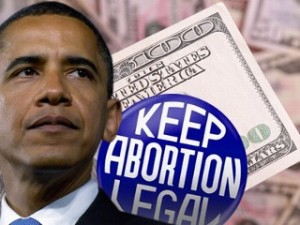 As we mark the 39th anniversary of Roe v. Wade, we must remember that this Supreme Court decision not only protects a woman?s health and reproductive freedom, but also affirms a broader principle: that government should not intrude on private family matters.? I remain committed to protecting a woman?s right to choose and this fundamental constitutional right.? While this is a sensitive and often divisive issue- no matter what our views, we must stay united in our determination to prevent unintended pregnancies, support pregnant woman and mothers, reduce the need for abortion, encourage healthy relationships, and promote adoption. ?And as we remember this historic anniversary, we must also continue our efforts to ensure that our daughters have the same rights, freedoms, and opportunities as our sons to fulfill their dreams. (President Barack Obama, January 22, 2012)

In order to commemorate the 39th Anniversary of Roe v. Wade, the Supreme Court Decision that legalized abortion in the United States (and has allowed for 54 million abortions), United States President Barack Obama released a statement in which he emphasized that he remains “committed to protecting a woman’s right to choose” to murder her child and refers to this act of murder as a “fundamental constitutional right”.? In an attempt to make this horrific act more palatable, Mr. Obama then talks about the need to “reduce the need” for murdering the unborn (DUH!), “prevent unintended pregnancies” (as long as it’s done without promoting abstinence), “support pregnant women” (I totally agree with him on this point) and “promote adoption” (Amen!).? He then closes by pledging to “continue our efforts to ensure that our daughters have the same rights, freedoms, and opportunities as our sons to fulfill their dreams”.? Let’s see if I understand… in order for our daughters to be able to fulfill their dreams, they must retain the right to freely murder their children (????????).

As we commemorate this tragic anniversary,? here are a few of my suggestions:

1. Pray daily for an end to abortion.

2. Don’t fall for the “choice” and “reproductive rights” rhetoric and think about what the pro-abortion supporters are actually saying.? They are promoting the murder of children!

3. If you are Catholic, you must ALWAYS vote for life!? Please etch this message from Mr. Obama in your memory and remember this in November.? Also, remind your fellow parishioners who have Obama bumper stickers on their cars of what the Church teaches!

4.? Pray for Obama’s conversion to the pro-life camp.? I am not judging his motives, but his position is TOTALLY UNACCEPTABLE! He is promoting murder as a “fundamental right”.

5. Pray daily for God’s mercy on the United States and on the world…We need it!

6.? Pray daily that more people realize that this issue is more important than how much income tax they pay.

You can read more about the story here.

This entry was posted in abortion. Bookmark the permalink.