Listen To Your Blessed Mother: Confusion 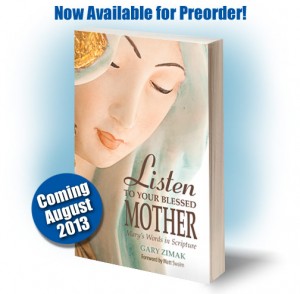 One day, God dispatched an angel named Gabriel to a city of Galilee named Nazareth. He urged her to not be afraid and assured Mary that she had found favor with God. Then he proceeded to explain the purpose of his visit, a purpose which would be enough to make most people afraid. Mary was given the details of a plan that would have her conceiving a son. That son, named Jesus, ?will be called Son of the Most High, and the Lord God will give him the throne of David his father, and he will rule over the house of Jacob forever, and of his kingdom there will be no end.? (Lk 1:32-33) While you and I may look at these words and be confused as to what?s being asked, a devout Jewish girl would have known exactly what was being stated. Mary was being asked to become the mother of the Messiah!

After the angel finished speaking, Mary was confused and asked a simple question ? ?How can this be, since I have no relations with a man?? (Lk 1:34) Some people will look at Mary?s words and wrongly conclude that her faith was weak. She?ll be compared to Zechariah who, a few verses earlier, doubted Gabriel?s prophecy about the pregnancy of his wife. Didn?t Mary and Zechariah both doubt the angel?s message? Not at all. Mary believed and Zechariah doubted. How do I know, you might ask? The answer lies in Gabriel?s reaction. After Zechariah?s question, the angel stated that he ?didn?t believe his words? (Lk 1:20). Mary received no such rebuke because, unlike Zechariah, she was simply asking for details.

Sometimes we lose sight of the fact that, although Mary was sinless, she was still human. Being chosen to become the mother of God didn?t automatically give her all the answers. Like us, there were times when Mary had questions about God?s will. Even though she always wanted to follow the Lord?s plan for her life, she was sometimes confused and needed to discern His will. As for Our Lady?s question to the angel, some background is necessary in order to understand what she is asking. The common belief of many theologians throughout the years (including Blessed Pope John Paul II, St. Augustine and St. Gregory of Nyssa) is that Mary was confused because she had consecrated her virginity to the Lord. Although unusual for married people, this practice was not unheard of in Mary?s time. This theory is supported by looking at Gabriel?s words. He told Mary that she would conceive and bear a son named Jesus. He didn?t say when, only that it would happen at some point in time. Since Mary was engaged to Joseph, it would be expected that she?d bear his children, therefore there?s nothing unusual about the message?unless she vowed to remain a virgin. Always desiring to do what?s right, Mary made a decision to do what she thought was best, but then Gabriel appeared with some new information. When informed that God wanted her to have a child, Mary needed to reevaluate her plan. Wanting to fulfill the will of God in her life, she needed to ask the important question. How can this be? Please tell me the details so I can cooperate with God?s plan. Far from doubting, Our Lady was pondering Gabriel?s astonishing message and was asking for guidance in carrying out God?s will.

Mary?s words to the angel remind us that it?s perfectly acceptable to ask questions. If you feel that God is asking you to do something, but you?re not sure how it?s possible, go ahead and ask Him for details. Mary did. If you?re carrying a heavy cross and can?t understand why, ask the Lord to enlighten you. Unfortunately, I can?t promise that you?ll get the answer you want. Instead, the Lord?s answer may be, ?trust me?. If that?s the case, you may be asked (like Mary) to go along with His plan without knowing all of the fine details. If you have a difficult time doing that?join the club! However, don?t ever forget that Mary can help you tremendously. As someone who?s ?been there, done that?, she knows exactly what you?re going through. Turn to her and ask her to share some of her faith with you. I can guarantee you that, as stated in the Memorare, ?never was it known that anyone who fled to her protection, implored her help, or sought her intercession was left unaided.?

The Message: God has a plan for my life and wants to make it known to me. Through prayer and careful listening, I can become aware of that plan and put it into action.

(The above is an excerpt from Listen To Your Blessed Mother – Mary’s Words In Scripture, the latest book from Gary Zimak. As someone who always sought to follow God’s will, Mary can teach us how to be better Christians and will help us to grow closer to Jesus. By looking very carefully at Our Lady’s words and actions as recorded in the Bible, we can “hear” her voice and benefit greatly from her motherly advice.)