How Mother Angelica And EWTN Saved My Life 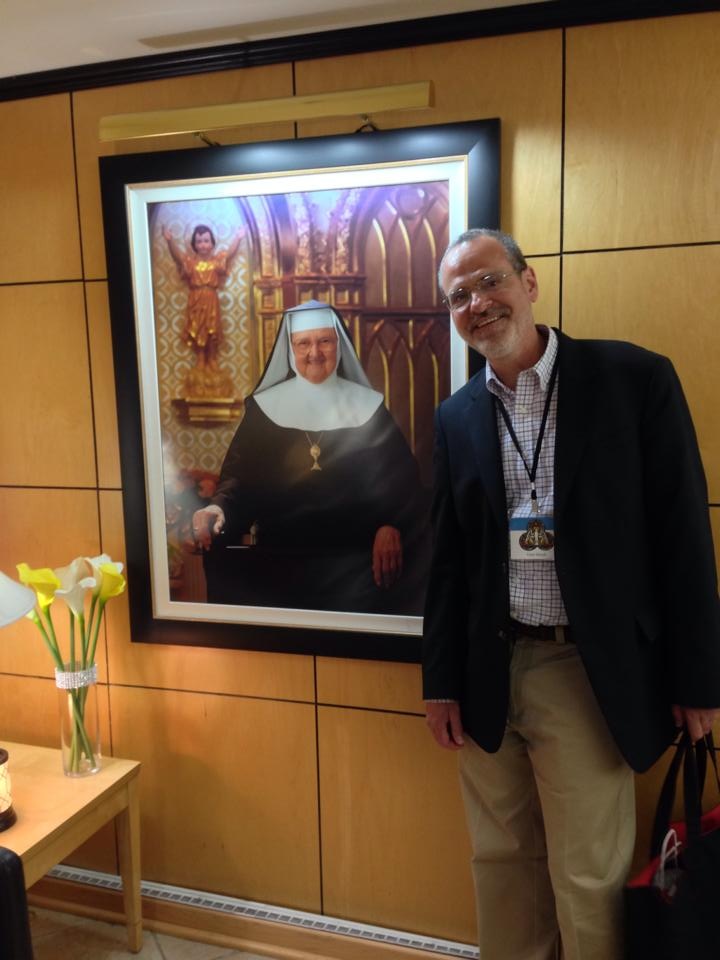 On May 2, 2014, I was invited to give a talk to a group of Catholic leaders in Birmingham, AL. In attendance were many of my heroes, including Catholic TV/Radio personalities, EWTN executives and founders of Catholic ministries from around the world. At first, I was overwhelmed. What could I possibly offer to these individuals? I was relatively new to full time ministry and (in my opinion) hardly successful. Since the conference was sponsored by EWTN, I decided to talk about Mother Angelica and how she inspired me to get to know Jesus and to respond when I felt Him calling me to full time ministry. I shared how Mother helped me to keep going, even when I felt like quitting. As a tribute to the life of Mother Angelica, I am sharing a transcript of my talk with you. Even if you are not involved in full time ministry, there is a message here for you. Jesus loves you and wants to be your friend. He is the answer to any problem you will ever face and through Him you can have eternal life in Heaven. As you grow closer to the Lord, you may be asked to carry a cross or take on a task that seems impossible. That is never the case. The life of Mother Angelica gives us proof that all things are possible with God!

Walking By Faith With Mother Angelica

(Transcript of a talk by Gary Zimak to a gathering of Catholic leaders in Birmingham, AL on May 2, 2014)

After being asked to do this talk, I was concerned. What can I say to a room full of All-Stars? Then I realized that I do have a very important message and it?s one that only I can deliver. It?s the story of how I?m trying to follow God?s plan for my life even though, on the surface, it doesn?t make sense. It?s a message that I hope will inspire you to continue doing what you?re doing and to remind you that ?with God, all things are possible?! As the author of ?A Worrier?s Guide To The Bible? and ?From Fear To Faith? and someone who travels around the country speaking about overcoming anxiety, I feel a little funny admitting this, but?

I have a BIG FEAR!

What makes me feel a little more comfortable is that someone I admire greatly also has the same fear. I?d like to share a quote from that person and let?s see if you know who it is?

?I?m not afraid to fail, because I?ve always learned something when I failed. I?ll tell you what I?m afraid of ? and when I think about it I break into a cold sweat ? I?m scared to death of dying and having the Lord say to me, ?Angelica, this is what you might have done had you trusted more?. I?m petrified of that.?

Let me tell you my story?

I have suffered from anxiety from the time that I was very young. I am a hypochondriac, a coward, I love comfort and I am not a risk taker. I am a cradle Catholic who up until late 2004 (with the exception of a few brief periods) was very lukewarm about my faith and had no personal relationship with Jesus Christ. I went to Mass each week and was too lazy to even pursue other denominations. In late 2004, a mystery ailment scared me and I thought that I was going to die. I knew that I wasn?t a good Catholic and was afraid to be judged. I was determined to learn more about my Catholic Faith. I began to listen to EWTN Radio, watch EWTN TV, attend daily Mass and pray the Liturgy of the Hours.

A couple of interesting things happened?

I felt great peace even though I still thought I was going to die.

I started out thinking I was going to learn more about my Catholic Faith and become a better Catholic, but I also ended up meeting and growing to love JESUS CHRIST!

Eventually, the symptoms went away and no diagnosis was ever made. I resolved never to go back to my lukewarm way of life.

In 2008, I felt the need to share what I learned with other lukewarm Catholics and FollowingTheTruth.com was created. I started blogging, doing numerous EWTN radio/TV programs and signed a contract to write a book, all while working full time as a project manager. I began to feel a call to work full time for the Lord and went on numerous Church related job interviews, getting turned down for each one. My wife Eileen and I prayed that I could work full time for the Lord, however, we thought that it would be in some sort of traditional job.

In January 2012, our prayers were answered in an unexpected way. I was laid off! For the first time in 30 years, I was not collecting a weekly paycheck.

Eileen and I prayed about it and reached the decision that I should do the ?impossible? ? become a FULL TIME Catholic Evangelist. In my mind, it was ?impossible? to make a full time living and support my family as a Catholic Evangelist, but this is what I felt the Lord was calling me to do. The first year was difficult for me, as I struggled to obtain paid speaking engagements. Fortunately, we had some savings. I continued to pray and asked the Lord to ?let it all fall apart? if it wasn?t His will for me. New doors kept opening up, but very little money was coming in.

At The End Of My Rope

Last year, I attended this conference for the first time and I was very discouraged. I was just about out of money, had very few speaking engagements lined up and spoke to several of you saying the same thing:

?My apostolate is on life support. Anything you can do to help me get more speaking engagements would be greatly appreciated?.

When I arrived home, I spoke with my spiritual director and he thought that maybe the Lord was telling me that it?s time to move on and get a more traditional job. He told me to pray about it and give it a little more time. I decided to take a ride to one of my favorite places, The Shrine of Our Lady of Czestochowa in Doylestown, PA. As I sat in front of Our Lord in the Blessed Sacrament and glanced at the image of Our Lady with the Baby Jesus, a very strong message came to me:

While I still didn?t have any new speaking engagements or guarantees, I left there feeling that I was doing what God wanted me to do and things would somehow work out for me.

Mother Angelica To The Rescue

I decided that I should finally read Mother Angelica?s biography so that I could look for signs that I was on the right or the wrong track. After all, she was asked by the Lord to do ?the impossible? and maybe I could learn from her story. Before I read the book, I assumed that everything always worked out perfectly as she built EWTN. I thought that if God wants you to do something, then everything just falls into place. I thought that if you run into problems and that you don?t get a lot of donations or if you?re not booked solidly for the next year then the Lord is telling you it?s time to move on. I was pleasantly surprised to learn that Mother Angelica failed sometimes. I also learned that the network that the network was on ?life support? many times. The most important lesson that I learned from Mother is that quitting is not an option. I asked myself the question, “Did I really give it my best shot?” I kept saying I did, but did my actions support my words?

I needed to make sure that I truly ?gave it my best shot?and realized that there were still some things that I could do. I started mailing books, letters, making phone calls and networking. I also kept praying and asking Our Lady and Our Lord for guidance. By the grace of God, I am still working in full time ministry. We live month to month, but my family and I have never been more peaceful. We are all learning what it means to TRULY trust in God and I will not quit. I?m willing to fail or be defeated, but I won?t quit until I have done all that I can.

If God Brings You To It, He Will See You Through It!

Many of you know this, but I?m going to say it anyway. The fact that I?m able to be here today and address you is proof that if God asks you to do something, He will give you what you need to do the job. My job (and your job) is to let Him work through us.

I also want to emphasize that I am doing something which the world says is ?impossible?. I have a business degree. I have no radio, television or writing credentials. I am a shy person by nature who has always been afraid to speak in public. On the surface what I?m doing for a living makes no sense, but somehow it?s working.

I can totally relate to Mother Angelica’s statement, ?We don?t know what we?re doing, but we?re getting pretty good at it.?

I know my work will come to an end one day, as will yours. My goal is to make sure that I don?t quit due to lack of trust. I pray every day that I will continue to say ?Yes?, just like Abraham, just like Moses, just like Our Lady, just like Mother Angelica did and just like each of you. Through my two plus years in full time ministry, I have learned a valuable lesson. It?s a lesson that I try to learn better each day. It?s a lesson that Mother learned and lived every day:

?Never put a lid on God. You can?t give God a thimble and ask for a quart. It won?t work. Your plans, your projects, your dreams have to always be bigger than you, so God has room to operate.?

Now I would like to briefly speak to each of you. No matter how successful your apostolates are, you have probably experienced moments of discouragement. You may be tempted to give up, thinking that you?re not making a difference. I?m here to tell you that you ARE making a difference and many of you have impacted my life. I?d like to speak to those of you who are involved in any way with EWTN. Mother Angelica has expressed the opinion that the whole network may have been created to help one soul. I would like to thank you for being a part of that network and to let you know that EWTN has saved my soul. Without EWTN, not only would I not be addressing you today, but I would never have gotten to know Jesus personally.

Thank you for saving my life, Mother Angelica. I will continue to do my best to continue your work of bringing souls to Jesus Christ. May you rest in peace.

“You may be the only Jesus your neighbor will ever see.” (Mother Angelica)

1 Response to How Mother Angelica And EWTN Saved My Life