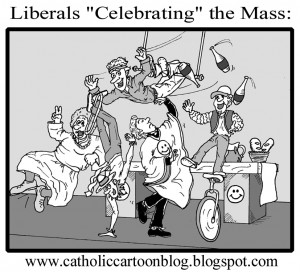 For the record, I don’t like holding hands during the Our Father, participating in a “love fest” during the sign of peace, and talking in Church before/after Mass.? I don’t appreciate it?when there are more extraordinary ministers than parishioners or when a large number of musicians perform in the sanctuary.? I cringe when priests?ad-lib during the Mass,?especially during the Eucharistic prayer.??And why?do I dislike these things, you may ask?? Simple – Because we’re?not supposed to do them!

Now that I got my personal feelings out of the way, let’s discuss how we?should handle the liturgical abuses/annoyances we run across.? Here are a few suggestions that I’ve found to be effective, some of which may surprise you:

Question your motives – The first question we should ask? is “Why is this bothering?me so much”?? I know from personal experience that our annoyance sometimes results from?excessive pride.? One of the unfortunate?by-products of?studying the Catholic Faith is that we sometimes start to feel smarter than our fellow parishioners (or priests).? We’ve read the?GIRM (General Instruction of the Roman Missal)?from cover to?cover?and know that Father is definitely not supposed to be doing “this or that” and we’re going to tell him.? Why?? Is it because there is really harm being done or is it because we think that we’re smarter than him?? Some prayerful meditation on this question may?provide a surprising answer.? Sometimes recognizing our true motives can be difficult, but it should be the first step in dealing with these situations.?

Set a good example – One of the most frustrating things about liturgical abuses or a lack of reverence at Mass is that it is often outside of our control.? However, while I can’t control the behavior of the priest or other parishioners, I can control my own actions.? If you’re annoyed that people are talking before and after Mass, try setting a good example by closing your eyes and praying.? While it’s often difficult to concentrate, it does have an effect on others and discourages?them from interrupting your prayers.? In addition to discouraging others from interrupting your prayers, this action provides a good example of reverent behavior.??

Ignore it – It’s important to differentiate between severe liturgical abuses and mere annoyances.? If the priest is saying “this?REPRESENTS my Body” instead of “this IS my Body” when consecrating the Host, you’ve got a big problem on your hands.? This could very well invalidate the consecration and should be brought to the attention of your pastor or bishop.? If, on the other hand, he is not elevating the host high enough or people are holding hands during the Our Father,?it would probably be better to “look the other way” and concentrate on the Mass.? Satan uses many?tricks to distract us at Mass and this is one of his favorites.? Don’t fall for it!

Take action– After prayer and analysis, you may determine that the abuse is so serious that you must take action.? If you choose to write a letter to your pastor or bishop, make sure it’s signed.? An anonymous letter will be thrown in the trash.??If you speak to them in person, always remember to be charitable.? Aside from being ineffective, having an “attitude” could very well cause you to sin, which is the last thing you want.

Once you’ve made the decision to either ignore the situation or pursue it, let it go and move on.? At this point, it’s out of your hands and you should not let it become a distraction.? While I don’t recommend switching parishes in haste, sometimes it’s necessary.? Before you decide to?pursue a new parish, however, make sure you take the matter to prayer.? Whatever you do,?keep?your focus on the Lord.??Losing sight of Him is worse than any liturgical abuse that you’ll ever?encounter!

This entry was posted in abuse, liturgy, Mass. Bookmark the permalink.

3 Responses to What’s The Best Way To Handle Liturgical Abuse?